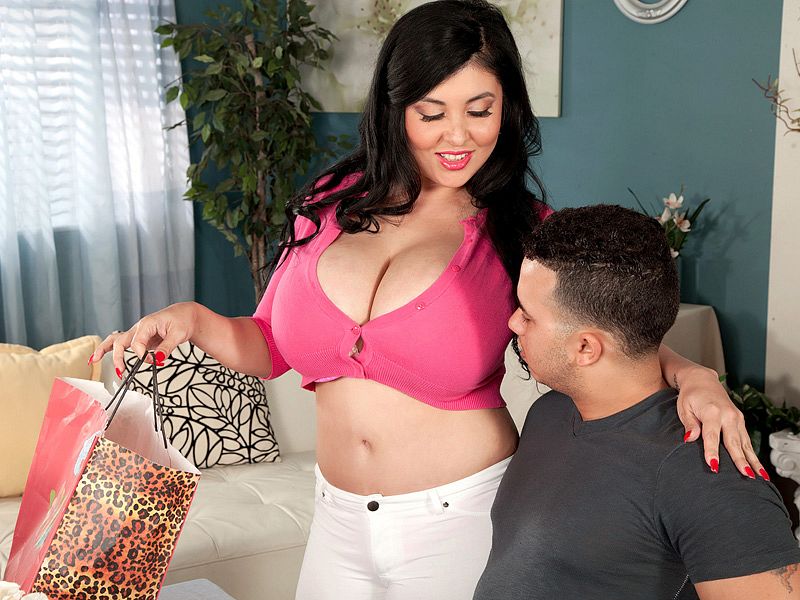 On a trip to visit her friends at SCORE, super-sex bomb Daylene Rio has just returned from sweater shopping at the mall (where every eye was on her swiveling ass and big bouncing tits) and meets her scene fuck-partner Rocky inside the studio.

Everything is ready for Daylene's SCOREVideos special scene. Rocky is eager to get started with Daylene and get hands-on and cock-in. Not so fast for Daylene! Normally Daylene is not a tease and denial girl. This time she tells her porn-cock partner that she wants to try on her purchases first on-camera. He can fuck her in a different position for every sweater she tries on.

Daylene tries on a green number. She looks killer. Then a tight, white sweater. An orange cardigan is next. Caressing her bountiful booty and burying his face in her bodaciously big boobs, Rocky is about as interested in Daylene's sweaters as the Pope would be in reading the latest edition of SCORE magazine.

Now that Daylene has tried on her purchases, she opens Rocky's pants to see what he has for her. She puts her mouth on his underwear-covered cock and leaves his briefs wet with her saliva, then pulls out his cockasaurus and, staring at him with her outstretched tongue eager to give him the famed Daylene Rio blow job, sucks it all the way. He got paid for this? Daylene takes turns tit-banging him and sucking him like a vacuum pump.

Daylene's passionate screams fill the room as they swap out to different positions; doggie, missionary and more.

Where does Daylene want his nut? On what part of the royal rack should Rocky release? If we know Daylene, it's gonna be on her lovely face or on her mountainous mams. No matter where, just watching whatever Daylene Rio does produces an erection reaction. Trying on tight sweaters. Sexing. Taking showers. Just walking.

Props to this great SCORE Girl. 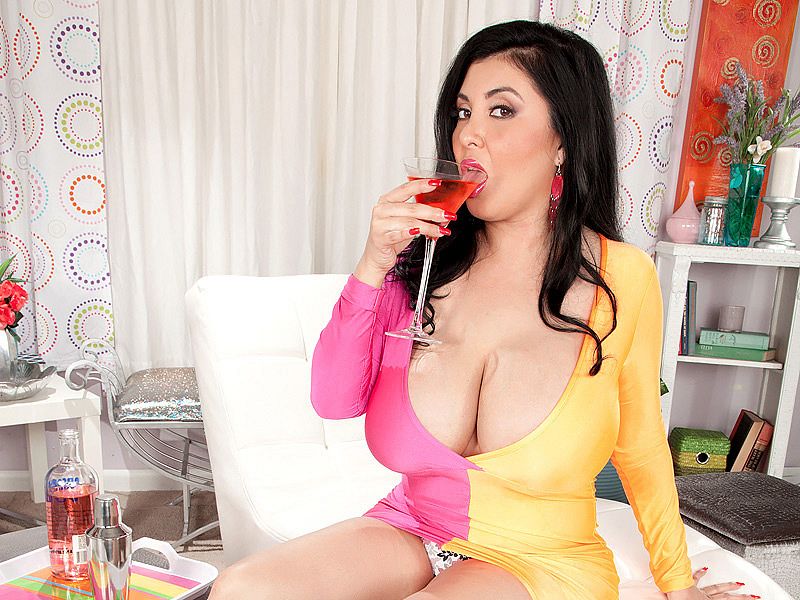 Every hour spent checking Daylene Rio out is a happy hour! Today is cocktail time. Daylene's tight dress is barely able to withstand the stress.

"I want him to give me a good massage from head to toe and to kiss my entire body. I like to wake up a man with a good blow job, then sex, and after that I will cook breakfast for him!" The perfect babe!

What makes Daylene laugh most of all?

"I love comedy movies and someone who can be himself and be a little goofy, not so serious or uptight."

What's the best part of being a beautiful woman?

"Being sensitive, sensual and being able to have multiple orgasms!" 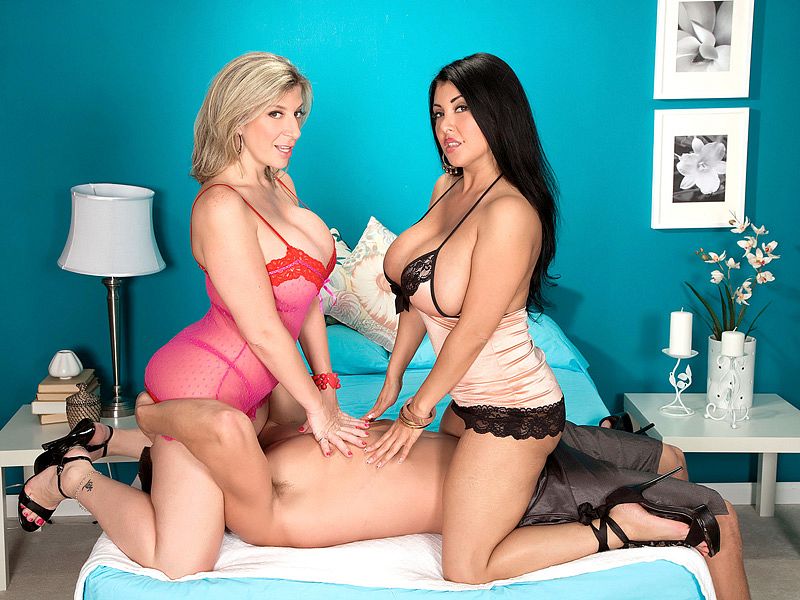 What is the number-one male sex fantasy no matter the nationality or race? If you're thinking of two hot chicks all over you, you're right. Threesomes of two girls-one guy are number one, way ahead of sex outside the bedroom or role-playing games. Here's a double big bang and we've brought in two very special guests for, as SCORE editor Dave put it, "a historic moment." For the first time, mega-hottie Latina from California Daylene Rio meets up with Miami's busty and assy cream queen Sara Jay. You'd think these two superstars of bed-wrecking sex would have crossed paths earlier but they haven't, until now. 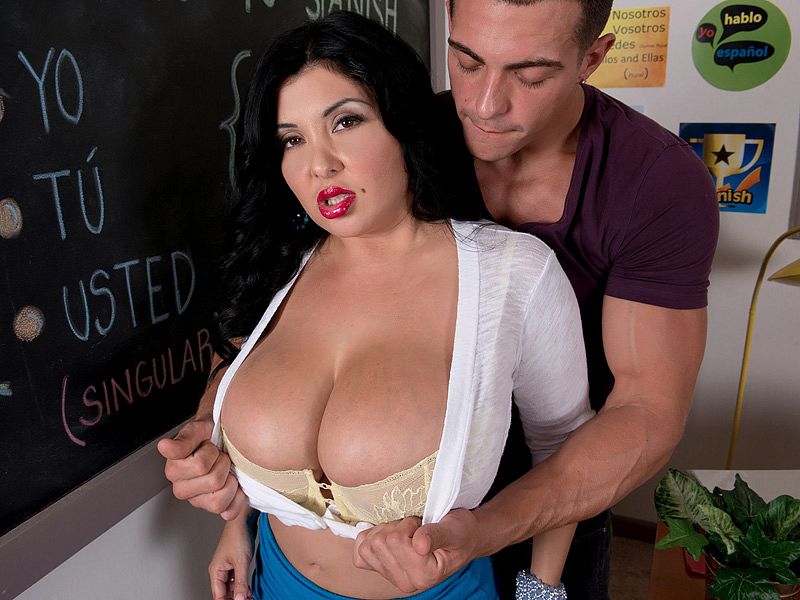 Who better to teach Spanish than this sexy damsel? Miss Daylene Rio, SCORE Girl and part-time Spanish-language instructor in an adult education class, is trying to tutor a guy who has other things on his mind. These things include Miss Rio's whopping blouse mountains, her jutting bubble butt and her cock sucking lips plus her beautiful face and shapely legs. Who the fuck can concentrate on any subject with an instructor like this?

Throwing caution (and her skirt, low-cut top, bra, panties, but not her heels) to the wind, Miss Rio finds her hot hole getting finger-banged. There goes the Spanish lesson out the window. Daylene drops to her knees and, her massive, naked tits dangling and hanging free, feasts on Johnny's extra-large enchilada, trying to stuff as much as she can into her hungry mouth. She squeezes her heavy pillows together--with his cock in the middle--one of her favorite things to do for a guy. If it was a tube of toothpaste, every speck would have been squeezed out.

Daylene gets on her desk for her first dose of hard wood in her pussy and by the time her boob-shaking fuck class ends with a splash, they'll have fucked on the floor, fucked standing up and fucked on a chair. He even picks Miss Rio up and carry-fucks her. Looks like he's getting an A and a gold star from Miss Rio. When the teacher is stacked and hot Daylene, who would not want to be her #1 pupil? This student has taught the teacher a few tricks!

While Daylene may be wearing a bra in the opener, she generally likes going braless except when she's at the gym. "I have to wear a bra when I workout," Daylene said. "I hate wearing bras. Working out is about the only time I wear a bra." This is a workout of a kind; the Tits & Tugs Workout. Daylene also has a talent for bouncing her boobs hands-free which you will also see in this video that combines her hands-on aptitude with tit-fucking and a blow job. This is a Tits, Tugs & Tongue special and Daylene has a firm grip on things, a deep cleavage canyon to bury any size meat-axe and a wet, sucky mouth. 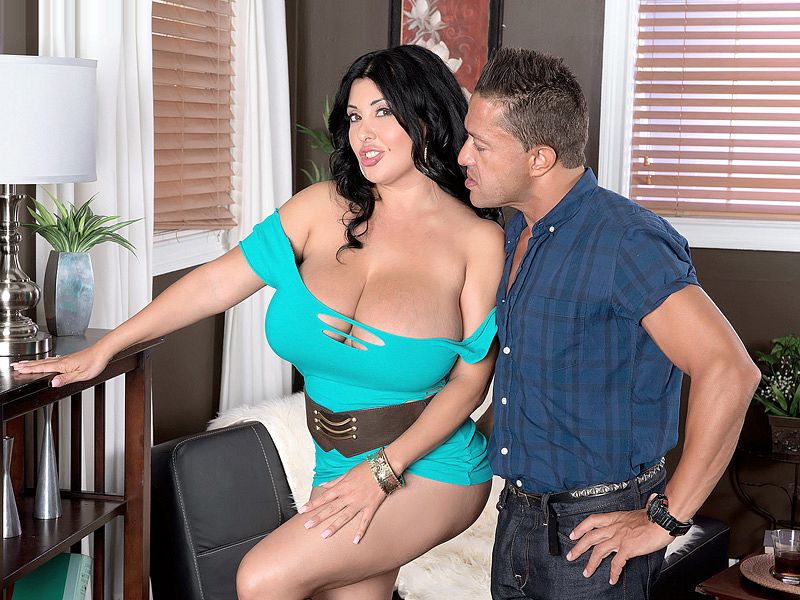 The always-super-hot Daylene Rio, the woman who could light your cigar just by touching the tip, is paired with Big Pike. A woman like Daylene deserves a thick cock stretching her pussy and mouth and Pike has fucked some SCORE superwomen before (Denise Derringer, Alexis Silver, Daphne Rosen) but not Daylene, a larger-than-life Mamazon who can drain a man of his nut-juice with the greatest of ease.

This fate befalls Pike who is boob-drunk and ass-drunk at the first sight of Daylene. He rams into Daylene's pussy and gives her a major pounding and creaming that gets her screaming.

"My very first boy-girl shoot was with SCORE," said Daylene. "It's still the most-fun thing I've done. I love taking control and being assertive. My fantasy is to fuck in Dodger Stadium!" We couldn't shoot this scene in Dodger Stadium but it still hit a home run because Daylene always knocks one out of the park at SCORE. 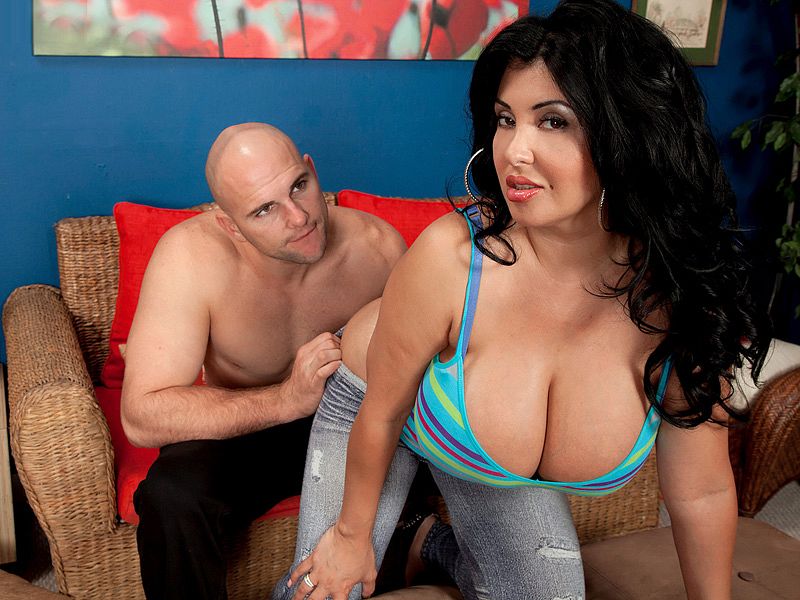 Too hot for only three X's, SCORE Girl Daylene Rio is rated XXXX for raw sex, a super-sexy personality, a beautiful face and body, huge tits that are even bigger now with more boobage and an ass that's now packed with more buttage. She is, like they say in the magazines, "A woman we love." It's always a big event at the SCORE offices when Daylene is visiting.

Daylene is back after over a year away. "It's my second home," says Daylene, who walked into these halls of hooters exactly six years ago (July, 2007). "It's where I can be myself." Since then Daylene has appeared in eight DVDs including XXXtreme Daylene (the all-Daylene DVD) and 18 magazines to date, with more to come.

Daylene will tell you that her time here is not a job and you'll never hear her use the word "work" when it comes to fucking or getting naked on-camera. "It's pleasure," she tells SCORE's editor.

Daylene's tits are bigger now. "They're a size and a half bigger now," says Daylene who says she's now a 36H! That's a two-cup size increase! Her boobs must be keeping pace with the U.S. stock market the past year. And some weight gain has also found a home in Daylene's ass-cheeks. You'll probably be as shocked as we were at first sight.

Daylene goes after JMac's shaft like a woman possessed but she'll find that her stallion is even more take charge than she is. And since this super-Latina believes in male control and is a sucker for cock power, she gives him everything she's got. And that's a lot because Daylene's got the sex drive of four or more women! The action is tremendous but then, this is Daylene Rio we're looking at, Latina Goddess of Boobs & Booty!